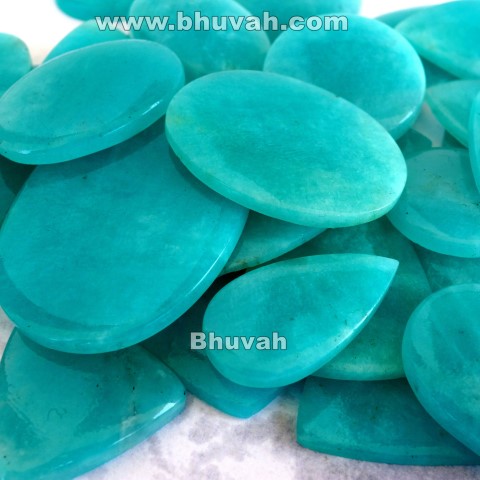 What is Amazonite?
Amazonite (sometimes called “Amazon stone”) is a green variety of microcline feldspar.
The name is taken from that of the Amazon River, from which certain green stones were formerly obtained, but it is doubtful whether green feldspar occurs in the Amazon area.
Amazonite is a mineral of limited occurrence. Formerly it was obtained almost exclusively from the area of Miass in the Ilmensky Mountains, 50 miles southwest of Chelyabinsk, Russia, where it occurs in granitic rocks. More recently, high-quality crystals have been obtained from Pike’s Peak, Colorado, where it is found associated with smoky quartz, orthoclase, and albite in a coarse granite or pegmatite. Crystals of amazonite can also be found in Crystal Park, El Paso County, Colorado. Other locations in the United States which yield amazonite include the Morefield Mine in Amelia, Virginia. It is also found in pegmatite in Madagascar and in Brazil.
Because of its bright green color when polished, amazonite is sometimes cut and used as a cheap gemstone, although it is easily fractured, and loses its gloss due to its softness.
For many years, the source of amazonite’s color was a mystery. Naturally, many people assumed the color was due to copper because copper compounds often have blue and green colors. More recent studies suggest that the blue-green color results from small quantities of lead and water in the feldspar.
Amazonite Clarity and Luster
Amazonite is typically opaque to translucent. It very rarely occurs in transparent form. It has a vitreous luster and a waxy shine when polished. Although it is a rare stone, amazonite is still considered a very affordable gem.
Amazonite Gemological Properties:
Chemical Formula: KAlSi3O8 Potassium aluminum silicate
Crystal Structure: Triclinic, prismatic
Color: Green, blue, green, gray, multicolor (white color of streak)
Hardness: 6 – 6.5 on the Mohs scale
Refractive Index: 1.522 – 1.530
Density: 2.56 – 2.58
Cleavage: Perfect
Transparency: Translucent to opaque
Double Refraction / Birefringence: -0.008
Luster: Vitreous
Absorption Spectrum: Not diagnostic
Fluorescence: Weak, olive-green


Amazonite is beneficial in osteoporosis, tooth decay, calcium deficiency and calcium deposits. It relieves muscle spasms.
Amazonite Spiritual Energy
Amazonite carries a spiritual energy of personal truth. It enkindles a harmonious interaction between the intellect and intuition, allowing one to find what it right and true within oneself and to lovingly communicate those values and beliefs to others. Amazonite can provide clarity for those who are out of touch with their truth, or who are unsure of what they have to offer the world, by gently guiding them toward their gifts and knowledge.

Amazonite also empowers us to manifest our dreams and desires by magnifying our intentions. Because it works through the Throat Chakra, these intentions must be spoken aloud. By holding an Amazonite and forcefully affirming aloud what one wishes to create it can powerfully enhance one’s ability to bring it into being.

Amazonite Color Energy
Amazonite reflects the Turquoise ray of influence, the color of the world at the vernal equinox, as the blues of winter melt into the greens of spring. It is a fresh, welcome energy that moves us to serenity as new growth and life emerges. It brings hope, discovery and balance. Turquoise color energy tempers excess, restores calm after a storm, relieves stress, and neutralizes extremes. It helps us moderate aggressiveness and deal with rage. It brings us back to center. In lighter shades, Amazonite crystals promote inner harmony and peace through spiritual understanding. Darker, richer stones bring considerable power – and flexibility. They counter intolerance and let us adapt to new ideas and environments.
Meditation with Amazonite
Meditating with Amazonite brings a keen awareness of everything to the consciousness. It inspires one to listen to and integrate all aspects of the self, and because it is a stone of truth, one can trust the visions, dreams and intuitions that surface while working with Amazonite.
Amazonite also allows one to simultaneously attune to both the spiritual dimension and the world of chaos in order to traverse all boundaries. It assists in finding a harmonious balance and bringing one back to center in order to live within the duality. It enables one to both manifest and retain the pure energy of universal love.

Divination uses of crystals Amazonite Divination
Dreams of Amazonite bring peace and calmness to the day.
Amazonite Goddess Crystals
Amazonite honors the goddess Tiamat, the Sumero-Babylonian Mother and Chaos Goddess. She is the elemental powerful force of chaos that was split in two to form the heavens and earth, often depicted as either as a serpent or a dragon. Tiamat is the personification of the primordial waters from which all life was formed.
Amazonite can be used in honoring Estsanatlehi, the Navajo Fertility Goddess and Whope, the Lakota Sioux Goddess.
Birthstones
There are several ways to find an appropriate birthstone. The traditional one is listed first. These are from the popular lists that most people are familiar with. The second way is to find your natural birthstone by the color wheel of life. You can click on the Natural Birthstone graphic below to learn more. Finally many people use the traditional stones of the Zodiac.

In this section you will find information on all three approaches.

Traditional birthstone Amazonite Traditional Birthstone
Amazonite is not a traditional birthstone.
Natural Birthstone Amazonite Natural Birthstone.
Amazonite which is turquoise in color is one of the natural birthstones of those born as spring begins (20 March to 19 April). Turquoise crystals bring you discovery and balance. Their vibrations help you find yourself and return to equilibrium.
Zodiac uses Amazonite – Zodiac Stone
Though there is no zodiac stone assigned to Amazonite, those born under the signs of Aries and Leo have a natural affinity for this crystal. It may also be used to treat depression in Scorpios.
Talisman uses Amazonite Talismans and Amulets
Amazonite, green Feldspar known as uat, was frequently used in amulets in ancient Egypt. The Assyrians associated it with the god Belus.
As an amulet of protection, Amazonite is a powerful Barrier Filter. Barrier crystals have incredible abilities to help us focus and amplify our efforts to keep undesirable elements out of our lives. Its crystalline structure gives it strength in all directions, allowing it to provide barriers to attack from all directions simultaneously.
Crystals with the earth power of a Filter, absorb positive energy flow but work to keep negative energy away from us. They help us view the world in a “glass half full” outlook, to see the best in others, the beauty in life, and the good in humanity. They keep us focused on the positive in situations and to not be overwhelmed by the negative. In our technological world, Filters also work to keep harmful electromagnetic transmissions from sapping our energy and health.
Feng Shui uses Amazonite Feng Shui
Amazonite’s elemental energy is Water. Water energy lies in its stillness, quiet strength, and purification. It embodies potentialities unrealized. It is yielding, formless, yet powerful. The water element brings the power of regeneration and rebirth. It is the energy of the circle of life.
Water energy is traditionally associated with the North area of a home or room. It is associated with the Career and Life Path area. Its flowing energy will assure a balance of energy as your life unfolds and flows. To keep your life moving forward towards your goals use the water elements energy.
Amazonite in Ancient Lore and Legend
Amazonite is revered as a stone of courage, said to have adorned the shields of the Amazonians, a formidable tribe of female soldiers. Though reputed to be mythological, some evidence suggests they were a matriarchal society of the Bronze Age. Legends claim some of these warriors had one breast removed to be more effective in their archery skills, and rubbed their wounds with a polished Amazonite to avoid infection. It was also used to heal lesions and illnesses of all kinds.
A Brazilian legend claims the Amazon women gave green stones, thought to be Amazonite, to the men who visited them.
To the Egyptians, Amazonite symbolized good luck and fertility. It was carved into small amulets for strengthening the reproductive capabilities of its wearer.
In the Egyptian Book of the Dead, Chapter Seven, “The Judgment of Osiris,” was carved on tablets of Amazonite.
Many objects of Amazonite were found in King Tutankhamen’s tomb, including jewelry, beads and a scarab ring set in silver. It is also thought to be one of the stones on his famous gold mask.
Amazonite, rather than Emerald, is believed to be more likely the smaragdus, or green stone, used as the Bereketh, the third stone in the breastplate of the High Priest, Aaron. It was engraved with the tribal name of Levi.
One legend regards Amazonite as a “Hope Stone,” whether for its strong potassium content that strengthens physical stamina, or its soothing color of the spring sky that inspires hope and faith.
Amazonite Gemstone and Jewelry Design Ideas
Amazonite jewelry can be found in set in all of the precious metals, but the lovely blue-green color of amazonite looks especially wonderful in silver. Many jewelers often use other materials, such as leather or ceramics to create interesting designs as well.

Amazonite gemstones are ideal for pendants, earrings, bracelets, necklaces, tie tacks, cufflinks or brooches. Daily-wear rings are not very common because amazonite is fairly soft, but with care, beautiful amazonite gemstone cabochon rings can be worn daily.
Most Popular Related Gemstones:
Moonstone, rainbow moonstone, orthoclase, andesine (andesine labradorite), labradorite and sunstone are the most common related gemstones.
Lesser Known Related Gemstones:
‘Colorado jade’ and ‘Pikes Peak jade’ are some of the lesser known trade names of amazonite. However, these are not actual ‘jade’ gemstones; they are simply high quality amazonite stones that possess a jade-like quality luster and color. Star sunstone and spectrolite are rare members of the feldspar family that are rarely seen.